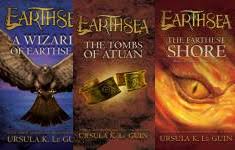 One of the most distinguished authors in 20th and 21st century America, Ursula K. Le Guin was a woman of enormous range intellectually, who won nearly all of the national awards for her fiction and non-fiction writings. She earned the rare title “A Living Legend”, awarded her by the Library of Congress in the millennium year 2000. She was awarded the National Book Foundation Medal for Distinguished Contribution to American Letters – their highest honor. And in the field of Science Fiction, she was peerless, winning all the major literary awards (often over and over again) in that genre, and she was only the second woman author to be honored as a Grand Master of the genre by her fellow authors. In short, she is a giant, and, to Portland, Oregon’s glory, one of our city’s brightest contributions to national culture.

The Faber Sessions #5 will take, in turn, the first three of her famous and compelling and profound Tales of Earthsea, an imaginary world that she creates, in which some of the most consequential issues of the meaning of human life in our world are winningly illuminated. These three short novels (to the first three would later be added three more Earthsea novels), about the same length as the books of C.S. Lewis’, The Chronicles of Narnia, will be, each in turn, the object of our explorations on the three Sunday evenings. Rick loves these novels and wants you to learn to love them also.

We will meet via ZOOM on the following three Sunday evenings of February: the 14th, the 21st and the 28th; 5 PM to 6:30 PM (Pacific Daylight Time).

The books that will be discussed for each of the gatherings are as follows:

Please RSVP below to receive more details prior to the start of the Sessions.

Tickets are not available as this event has passed.